On the 19th of September, the Canadian musician and singer/songwriter Leonard Cohen will be performing live at the Ülker Sport Arena in Istanbul, with his best songs to give the summer a good send-off. 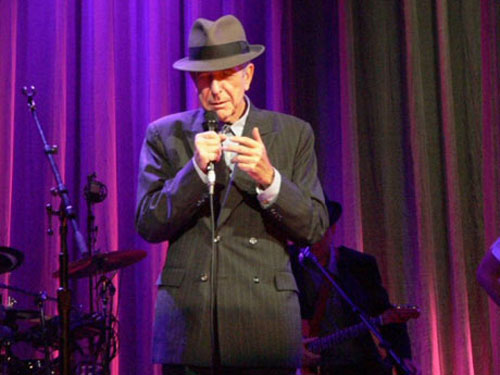 Leonard Norman Cohen was born in Montréal in 1934 in a Jewish family, spending his childhood between Montréal and Westount. Singer, songwriter, poet and novelist, at a young age he knew that he wanted to become involved in music, creating a country band in his teenage years called Buckskin Boys.

In the early 50s, Cohen entered McGill University in Montréal and the University of Columbia in New York City. During those years he released his first poems called Let Us Compare Mythologies, under the edition of McGill Poetry Series.

In the early 60s, he settled in Hydra, Greece, and published Flowers for Hitler in 1964 and the novels The Favourite Game a year earlier and Beaitiful Losers in 1966. At the time of this latest publication, he went to live once again in the United States and began to participate in folk music festivals and to compose music.

The first album by Leonard Cohen appeared in 1967 under the name of Songs of Leonard Cohen, with a cover of Suzanne, a song that the famous American singer Judy Collins

1977 saw the appearance of Death of a Ladies Man, with a very different style than the one Cohen had showed until then. Two years later he releaed Recent Songs, now with a more classic sound and more similar to his other records.

In the 80s, he released two albums: Various Positions (1984), which contains the famous Hallelujah, which Columbia refused to release in the United States, and I´m Your Man (1988), which was a turning point in his career in terms of what he´d written and composed. In this album he used a lot of synthesizers and irony and comedy in his lyrics.

In the 90s, Cohen experienced a spiritual retirement, spending time in a buddhist temple in 1994 after the promotion of his album The Future. Two years later, he became a zen monk with the status of Jikan Dharma, which means ´The Silent One´.

In 2001, he released in album Ten New Songs, followed by Dear Heather in 2004. The latter is a collaboration with Anjani Thomas.

In 2006 he published a book called Book of Longing, and together with Anjani Thomas he wrote the songs of the album Blue Alert. That same year the saw the appearance of the documentary Leonard Cohen: I´m Your Man.

This year 2012, Leonard Cohen released his new album, Old Ideas, a mature and intimate work by the artist. This album includes translations from some lyrics of the Spanish singer/songwriter Joaquín Sabina.

In 2011 he received the Príncipe de Asturias Award for literature and he´s also a member of the Order of Canada and the Quebec National Order.

If you´re having a good time in apartments in Istanbul, don´t forget to buy your tickets for this extraordinary concert of Leonard Cohen. You can´t miss it.