The Castle of the Star in Montiel (Ciudad Real)

Although it’s weird to write about myself, I find it especially thrilling to write about Montiel, its majestic castle, and the living history there I´ve learned from my people. Built up by the Arabs in the ninth century, it was later conquered by the Christians in one of the cruelest battles of history between Don Pedro I of Castile (who was nicknamed The Cruel One) and his brother, Don Enrique de Transtamare, who were archrivals. Specifically, the Battle of Montiel was fought there during the Hundred Years War.

My grandparents built their lives in the same place where Don Quixote of La Mancha lived out some of his adventures: the Campos de Montiel. I spent my summers, weekends and sometimes even Christmas there. In all, I have spent many wonderful years there and have good memories related to the surname Pretel. And of course, related to my grandparents´ house in the Plaza del Quinto Centenario. This house deserves an entirely separate post. 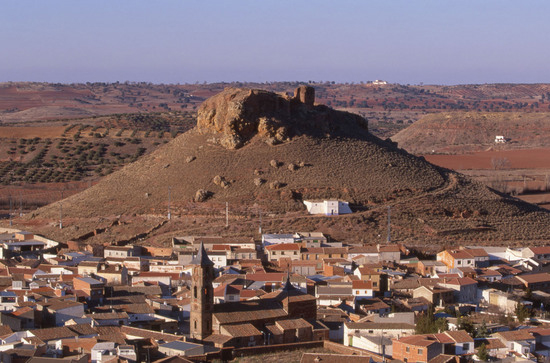 Several images come to mind: my grandparents (Antonio and Dolores), climbs to the near ruins of the Castle of the Star with my siblings (Aida, Celia and Antonio), my parents who never fail me (Adelaide and Joseph) and Paquita (who has always been like family to me). In fact, many of the mysteries of Montiel I now know I owe to her. She told me that back when she was a still a child, there were dozens of underground tunnels connecting the castle with the hill known as the Cerro de San Polo (which is located across the road and separated by the same). But there´s more. Paquita insisted that those tunnels, which served as a refuge for many during the bloody battle, gave way to rooms full of gold. The treasury of Montiel said called it while enjoying milk with cookies and pieces of chocolate in her room. I´ll never forget her or her stories that made me believe in castle’s magic. Thanks, in fact, to all my people who have felt the need to climb there. And I assure you that the route there is not entirely a comfortable one. There are several paths to choose from, but I usually took the cemetery route since it was easier. Once you get up there, you’ll see that it is worth it.

On top of the Castle of the Star

The views of Montiel from the top are spectacular. It’s easy to see the village church, the two-toned houses, the square, the fountain, City Hall, and the cemetery. The cemetery there is one of the nicest I know. I’ve never felt as much peace anywhere else. Once inside, you’ll see everything as through the eyes that have witnessed the results of the devastating wars. It really is the true treasure of the montielejos or montieleños. Since 2012, the castle belongs to all of them thanks to the financial contribution of individuals and businesses such as José Mota.
Where is Montiel?

If you would like to get to know my village, Montiel is a bit more than 200 kilometers from Madrid. It is easy. Just take the Nacional IV to Manzanares and from there’s it’s another 30 miles to reach it. You will pass by La Solana, Membrilla and Villanueva de los Infantes. You’ll recognize it immediately when you see the Castle of the Star and the clay-colored landscapes. It’s the perfect place to enjoy a more rural-oriented tourism.

Looking for apartments by days in Madrid ? If you are interested in visiting some of the magical communities in the surrounding areas, don´t miss Montiel!