International Day of Happiness. And, what makes YOU happy? 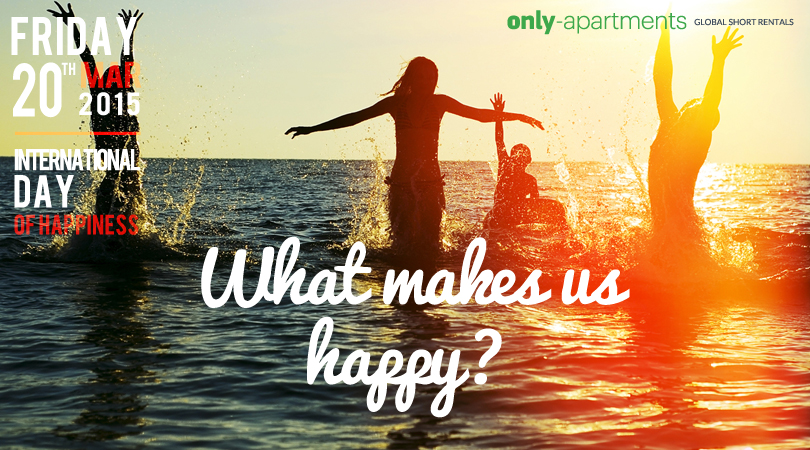 Have you ever wondered whether what makes Spaniards happy is the same as what makes Italians happy? Or how about the Germans? Does happiness even have a nationality? Do Englishmen and Frenchmen smile the same?

To celebrate the International Day of Happiness, at Only-apartments we have tried to sharpen the contrast between our differences and our common ground when it comes to being happy. We polled over 300 people from five European nationalities, and this is what we found:

Traveling- an Infallible Recipe for Happiness.

Whether a family trip or a couples retreat- traveling is what makes Europeans happy. A solid 58% of Spaniards polled admits their favorite family plan is traveling, in sharp contrast to the 21% who concede that theirs is a family meal, followed by a lengthy after-dinner session. The British, the French, the Italians, and the Germans agree that traveling makes for the perfect family plan (with the 62%, 75%, 69%, and 80% respectively); closely followed by a weekend away in the country as a popular second favorite.

When it comes to couples, a staggering 66% of Spaniards prefer a short getaway to a European destination, as opposed to the 13% who asserts they’d be happier with breakfast in bed and a slow morning. Topping the list for the British and French, however, is a romantic dinner and a night at the theater, which they hands-down prefer to breakfast in bed with their lover.

Arriving at our holiday destination and being helped by a complete stranger are the two top activities making Europeans smile.

Intimacy Improves while on Vacation

Only the Italians and the Germans admit they’d rather have sex with their partner any normal weekday. Meanwhile, 39% of Spaniards would rather get it on during a weekend getaway, followed by the 22% who’d rather get frisky on vacation, and the 20% who like to put out any weekday. When it comes to the Britons, the gap becomes even wider, with only 12% of those polled picking weekdays as their top preference, and 45% who would rather do it while on holiday.

Take a look at this infographic to know more about Hapiness