Everyone knows Slash: one of the best guitarist of all times and one of the founding members of the legendary rock band Guns N ´Roses. With them he recorded an album that has been considered among the best of the hard rock history: “Appetite for Destruction”. This album captured the best of an era of revolt as the decadent years in Los Angeles. By then (1986), the Guns N ´Roses lived a life on the edge, full of concerts, rehearsals and excesses. Slash’s talent would lead the band to become one of the biggest ones in the world. The multimillion-dollar contract, the band signed with Geffen Records, also allowed them to record a double album entitled “Use Your Illusion”, which not only proved that they very talented musicians, but also artists with very high pretensions. Of course, many have questioned the quality of both albums, but it was just a risky move that closed the eighties, before the grunge invaded the international radio stations. 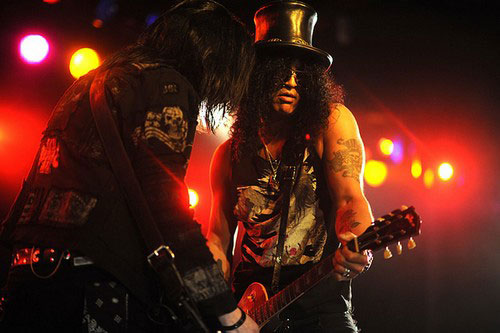 Slash on the other hand, after a few attempts in the mid-nineties to continue with Guns N ´Roses, formed his own band Slash´s Snakepit, with which he recorded two albums: “It´s Five O´Clock Somewhere” (1995) and “Ain’t life grand” (2000), with those albums he kept his blues and hard rock style, in a decade dominated by alternative rock. After this project, he founded the super band Velvet Revolver, in collaboration with Duff McKagan and Matt Sorum from the former Guns N ´Roses and the Stone Temple Pilots frontman Scott Weiland. After several tours, two albums, and many problems with the drug addicted Weiland, the band had to split.

However, Slash is one of the most active rock musicians of all times and hasn’t stopped touring since he left Guns N´Roses. Once he formed a blues cover band called, Slash´s Blues Ball, and in 2010 he edited a solo album that has his name. In May this year, just showed his second solo album called “Apocalyptic Love”, which he has been presenting with an international tour. Will the Guns N ´Roses play once again together? Rumor has it that they were offered millions to play together again. Axl Rose still sings with a new band and his voice is not as spectacular as before. If you want to rock in New York, Slash will perform a concert on the 18th of September at the Hammerstein Ballroom. Come and listen the best of his personal repertoire, the Velvet Revolver and of course, Guns N ´Roses. For more information, click here: http://slashonline.com/

Get apartments in New York and don’t miss this great concert with one of the best guitarists of all times. Slash´s new album, “Apocalyptic Love”, is a clear sign that he is still a great musician.