The Cranberries concert in Barcelona and Madrid

The Irish rock band returns to Spain. The Cranberries will present on October 5 at the Palace of Vistalegre in Madrid their sixth album called “Roses”  But it will not be the only concert by the Irish, the day before they will be playing in Barcelona at the Club Sant Jordi. 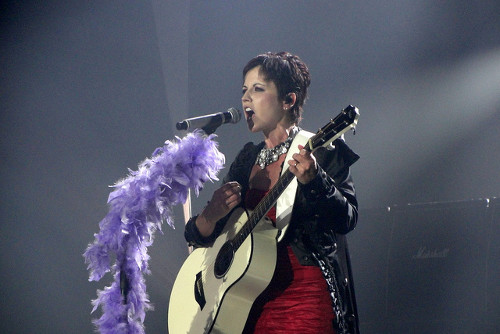 It has been two years since the Irish rock band visited our country,  just at the time when they got back together after seven years apart. Now back on track with a new album which was released on February 14, produced by Stephen Street and recorded in May 2011 in Toronto and London called “Roses”, this is the first studio album by the band in ten years. For them,  of course,  it is very special.

But, how did the form?. The Hogan brothers, once they finished school, began to help their parents who ran a bakery. One night during a concert they met Fergal Lawler, a hairdresser of Parteen. And this curious mix between bakers and hairdressers formed into what we now know as The Cranberries.

Their rise to fame happened in the 90s with the album “Everybody else is doing it, so why can’t we?” Which achieved them stardom for the album became a commercial success with over 5 million copies sold in the U.S. and more than 40 million albums worldwide. Their other successes are “No Need To Argue”, “To the Faithful Departed” and “Bury the Hatchet”. In 1999 they surprised us with “Just My Imagination”, undoubtedly one of my favorite tunes by them . “Just My Imagination” was the third single from their fourth studio album “Bury the Hatchet”.

This new album “Roses”, the sixth of their recording career, brings a more mature sound than before without losing their style. “Roses” opens with a very slow and very sexy song, “Conduct” and ends with the ballad that names this latest work. The single “Tomorrow” shows joy and optimism, but we also find topics transgressors as “Playboy Schizoprenic” Waiting in Walthamstow “or” Shoe me the way “.

The Cranberries  still have the same desire to get on stage as in the 90s. You can check them out on oct 4 in Barcelona and in Madrid on the 5.  Dolores Mary Eileen O´Riordan Burton on vocals  besides being keyboardist and second guitar, Michael Gerard Hogan on bass, Noel Anthony Hogan, also on guitar and Fergal Patrick Lawler, on drums, Finally again, all together.

Find apartments in Barcelona to attend the “The Cranberries” gig. Do not miss the songs of this legendary Irish band live, you never know if they will split up again and vanish another 7 years