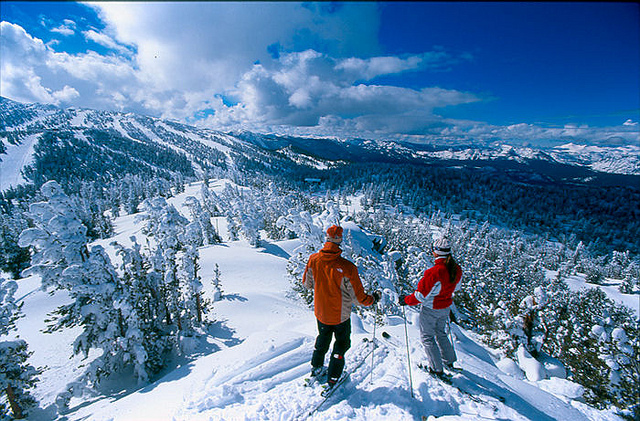 The summits of Spain are beginning to turn white. It is expected that this snow season will be especially long and intense. And you won’t have a lack of options. In this post, we intend to travel across Spain, from south to north: from the Sierra Nevada (Granada) to Grandvalira (Andorra), via La Molina (Gerona). Fans of alpine skiing, cross country skiing, snowboarding are in luck!

Skiing in the Sierra Nevada, Granada: The best thing about the Sierra Nevada, which has some 105 kilometers of runs, is the possibility of skiing so close to the sea. They’ve already opened the Laguna de las Yeguas Olympic run, the highest point from which you can admire the Mediterranean Sea, weather permitting, and even the Rif Mountains (Morocco). It is spectacular and unique from what other resorts offer. The Sierra Nevada also offers games on Pista del Mar for kids and other children’s activities that will allow parents to challenge themselves at their own pace in the snow. When you’ve finished skiing, Granada is just a few kilometers away offering an impressive array of restaurants and nightclubs.

Downhill skiing in Grandvalira (Andorra): This is the largest resort in Andorra, with 210 kilometers of runs. It has 6 different access points, 2 of which are from France. We speak of Encamp, El Tarter, Soldeu, Grau Roig, Pas de la Casa. In Encamp you will find one of the longest ski lifts in Europe (the Funicamp), and using it will save you a 45 journey. The heart of the resort is Soldeu, the favorite among younger skiers due to its wide range of evening entertainment. If you love snowboarding, head to El Tarter and its impressive Snowpark where you’ll be able to do all kinds of jumps and freestyle moves. Grau Roig area has a smaller circuit in the woods. And one more: if something is noteworthy in Pas de la Casa it’s the quality of the snow and the diversity of its runs.

The family-friendly La Molina (Girona): It was a pioneer in Spain, since evidence of the presence of skiers in La Molina has been found dating back to the beginning of the century, particularly since 1908. It is situated in a privileged spot in the Catalan Pyrenees and is surrounded by peaks of almost 3000 meters. The ski area of this small Catalan resort has 54 runs, areas for snowboarding, Telemark, freestyle and of course, skiing. It has numerous amenities near the runs: bars, restaurants, shops, hotels, apartments, etc. The La Molina resort is also very comfortable, very accessible. Getting to this snow-covered area of Girona and the resort is easily accomplished by car, bus or train. And since it’s located just 120 kilometers from Barcelona, it can be an easy day trip from the city. If you’re traveling with children, this is an ideal destination as it is one of the most family-friendly resorts on the peninsula.