Every year since 1762, New York City is colored green on March 17 to celebrate one of its most crowded and fun parties: St. Patrick’s. Of Irish origin, this celebration honors the patron saint of Ireland and was first introduced into New York society by a group made up of emigrants and military who missed their beloved Emerald Isle. It gradually became increasingly popular among New Yorkers and is now one of the biggest media events in the city of New York. But where does this Irish tradition come from?

The legend of St. Patrick dates back to the fourth century AD and follow the steps of the young son of a Roman military man and deacon who was captured by Irish pirates and sold into slavery in Ireland. After 6 years of slavery, he escaped with his faith intact and returned to his native Britain and was ordained afterwards as a priest in France. At age 46 he returned to Ireland to evangelize the locals and stayed on the island until his death on March 17, 461.

St. Patrick is credited with the symbolism of the three-leaf clover, which according to Irish tradition, represents the Holy Trinity: the Father, Son and Holy Spirit. And this is why the festival is green.

Things to Do on St. Patrick’s Day in New York 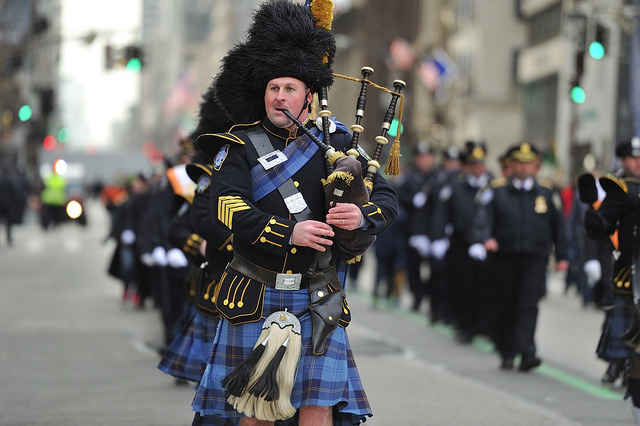 St. Patrick’s Day in New York is an event in the city and it features an extensive parade. Some two million people gather along Fifth Avenue during the nearly four hours of the walk, which is escorted by the Third US Infantry Regiment and followed by members of Irish institutions from all over the city. The parade begins at 11 am at the height of 44th Street and Fifth Avenue and continues on to Saint Patrick’s Cathedral on 50th Street before finishing near the Metropolitan Museum on 86th Street around 4pm. Of course, the parade is enlivened by music, beer and lots and lots of green.

Another very important event is the Mass at New York’s St. Patrick’s Cathedral, which is located opposite of Rockefeller Center. This building is the largest neo-Gothic Roman Catholic cathedral in North America and it brings together the entire spectrum of the Catholic community in New York City.

St. Patrick’s Day in New York is also the perfect excuse to get to know the Hell’s Kitchen area and witness the Irish contribution to the history and culture of the city.

If you would like to experience firsthand the spectacular St. Patrick’s Day parade, check out our apartments in New York City.