Ireland is colored green for the week. On March 17, 2015, Saint Patrick’s Day is celebrated in Dublin as well as in New York, Paris, Berlin and Madrid. Saint Patrick’s Day and has become a global holiday and he may well be the most celebrated saint worldwide. But of course, Dublin is the first, genuine and most authentic. 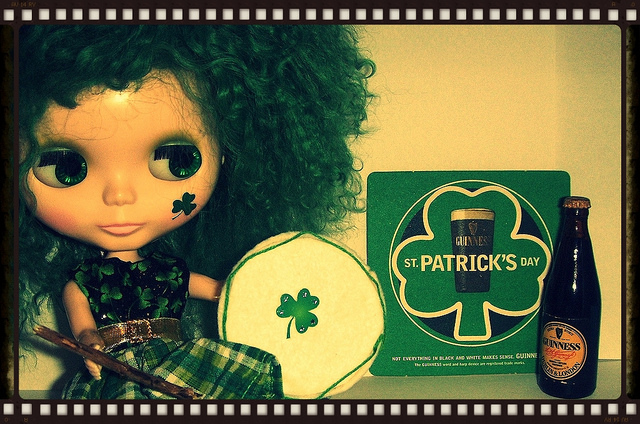 In case you don’t already know, St. Patrick was a missionary who introduced Christianity on the island. And although this is a religious holiday, in reality it has almost become a pagan festival, during which it’s normal to get drunk and sing with a beer in hand. You’ll then have almost an entire week more to think green (it almost seems like a Heineken ad slogan).

They will be days of street theater, traditional Irish music, regional dances, movies, contests and all kinds of shows. The ultimate goal is fun. For example, there’s the day of the big parade. On March 17 a crowd will pass by dancing from the north to south of the city: from Parnell Square, passing O’Connell Street, the River Liffey, the famous and prestigious Trinity College, Dame Street, to the Cathedral of San Patricio. The fun is 1.5 kilometers long.

And I wonder, what would become of St. Patrick without the Temple Bar? This neighborhood on the banks of the River Liffey is a mecca for beer. Chock-full of Irish pubs, young people turn out in droves to party into the night. In addition to pints of beer and Irish whiskey, most bars also offer live music every night that lasts until the wee hours of the morning. While this may be something extraordinary in some places, it’s normal in Dublin. And if you still have time and energy, check out the Guinness Storehouse in Dublin, which is absolutely a national symbol. Admission costs about 15 euros (for adults) and I assure you that after seeing how the plant operates and trying several pints, you will go home quite content.

Drinking is not, however, the only thing to do. You can also make healthy plans for St. Patrick’s Day. For example, it is common to see families in Ireland at Merrion Square, one of the most visited parks in the city, because on that day it is transformed into an impressive playground.

I will end this post like I started. Saint Patrick is one of the most celebrated holidays in the world, and you can see in person on March 17 how the most visited monuments in the world are dyed green in honor of the patron saint of Ireland. Among those participating in “Global Greening” this year are the Colosseum, the Eiffel Tower in Paris, the Empire State Building in New York, the famous 7-star hotel Burj Al Arab in Dubai and the Puerta de Alcalá in Madrid. On this day, green is a state of mind even beyond Ireland.