10 Travel Destinations for a Killer Halloween

There’s nothing quite as scary as seeing October 31st fast approaching and not having a single decent plan to celebrate the spookiest night of the year. The world is full of eerie places that well deserve a visit on this special date.

If you have a clear idea of what to be this Halloween, and you’ve bought the decorations, the candy, and the perfect zombie makeup, all that’s left to do is to choose destination and get ready for a night that will have your hair standing on end.

Warning: these locations may offend the sensibility of some readers. We urge weak-spirited and highly-impressionable travelers to abstain from going anywhere near any of these monstrous destinations: 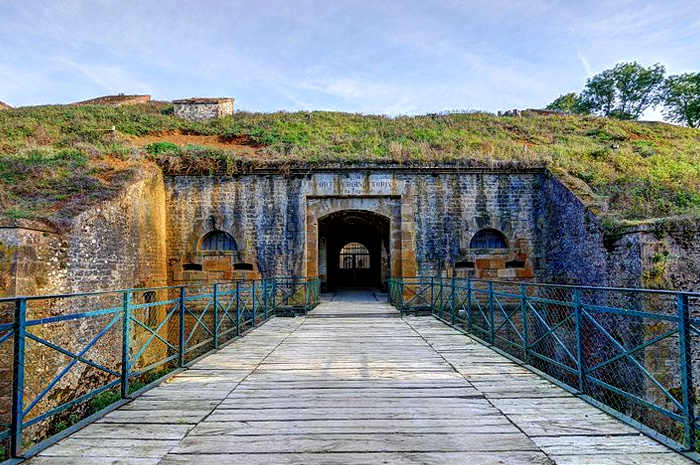 Not as well-known as the French capital, this town in the Champagne-Ardenne region is immersed in an aura of mystery and enchantment guaranteed to give you the creeps from the moment you set foot on it. It probably has to do with the fact that its history is strongly linked to witchcraft, as it was the site of one of the largest witch-hunts of the 16th century. They still remember it to this day, taking advantage of the night of October 31st to organize the Witch Festival, a ball featuring Celtic music and horror costumes. 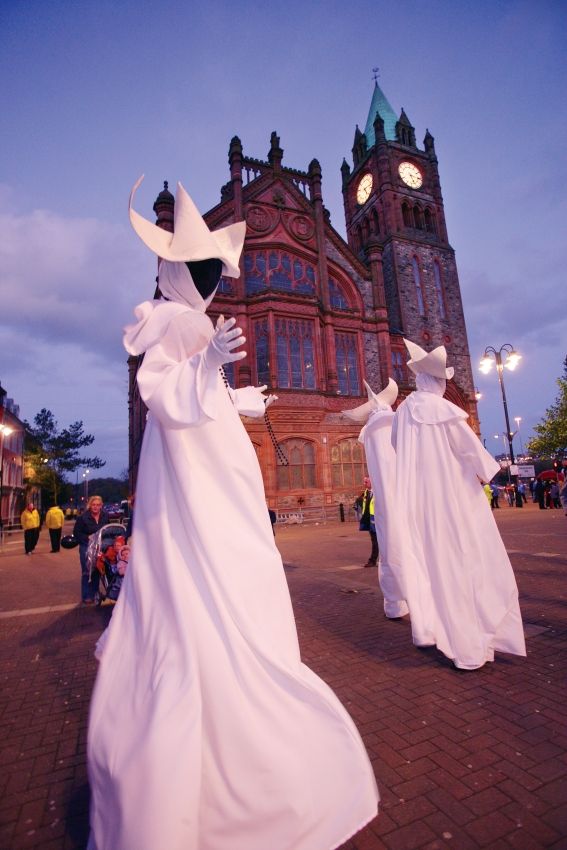 Halloween on a grand scale. This town in the North of Ireland takes Halloween night very seriously. Pumpkins of all shapes and sizes, black cats, owls and witches take over the city. Their Halloween activity program is almost endless; from specialized markets, to parades, Halloween crafts workshops, and even an amazing Gothic ball held inside a 19th century cathedral. Don’t even think about showing up without a costume. Witches, ghosts, and monsters are all welcome. 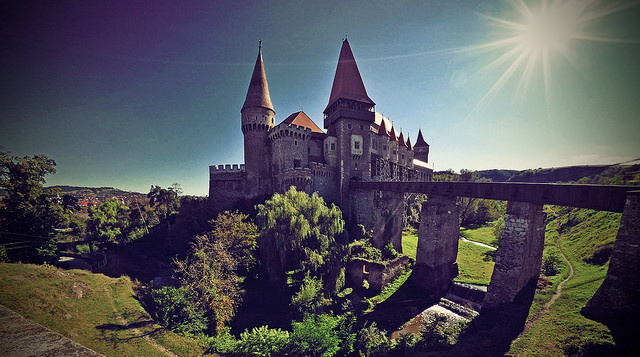 This destination surely rings a bell. It almost seems like the very name wears a cape and has long fangs. That’s right; this is the town where Count Dracula resides traditionally. One visit to Sighisoara Castle will take you back to the 15th century, where shadows blur into the night and harrowing screams echo off the walls.

Mexico is one of those places that has known how to reconcile the celebrations of Halloween night and the Day of the Dead the day after, so that both acquire absolute prominence during the last week of October and the first week of November. It’s customary for families to celebrate the Day of the Dead visiting their departed ones at the cemetery. However, far from being a somber and gloomy event, Mexicans make the most of the occasion and look upon death with a high dose of humor. It should thus come as no surprise that they exchange skulls as gifts. These are generally edible sugar skulls given to friends and family as a token of friendship and appreciation. 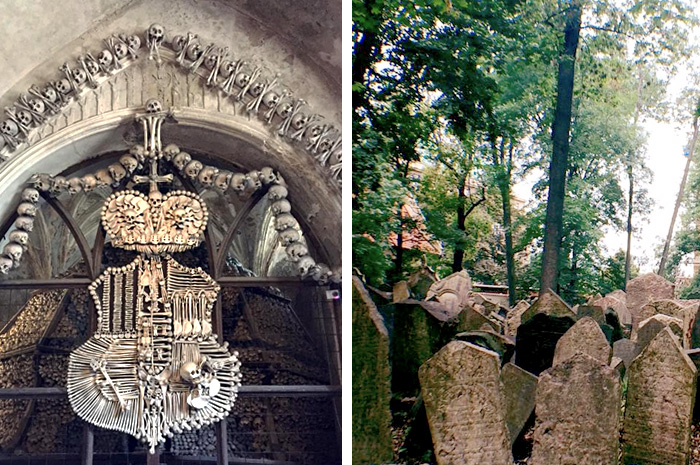 Prague has everything going for it to become a favorite destination of the very bravest and those who love fright. The general atmosphere of the city is in itself depressing and gloomy, added to the quasi-magical aura emanating from building such as Our Lady before Týn, Prague’s gothic cathedral in the old town, towering over the tourists like a disturbing and threatening force.

But undoubtedly, what makes Prague a true capital of fear are monuments like the Sedlec Ossuary, a small chapel beneath the Cemetery Church of All Saints in Sedlec to the southeast of Prague, which as many of you know was almost entirely built by piling up human bones. Walking through it makes your stomach turn.

And if that wasn’t enough, you can top up the chilling experience with a visit to the Old Jewish cemetery in Prague’s Jewish Quarter, with over 100,000 burials beneath your feet. The mere thought of it is breathtaking.

Evidently, the city is fully aware of its allure at this time of the year and there’s no shortage of themed parties and activities offered on this harrowing date. Dressing up in full costume is a must to enjoy them to the fullest. 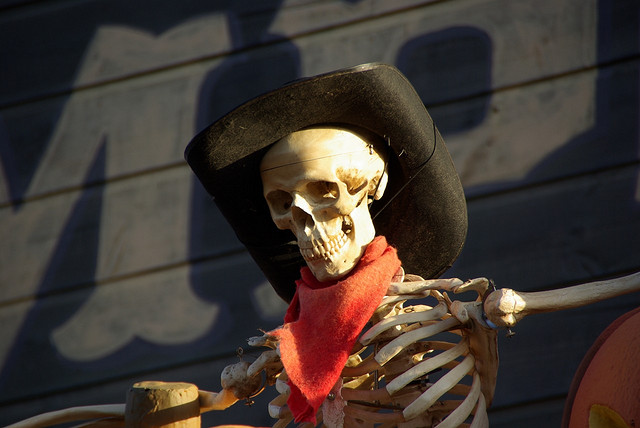 Some places are terrifying in themselves; while others try hard to achieve that at this time of the year. And some definitely succeed. Such is the case of Port Aventura, a theme park in the province of Tarragona. The creepiest characters and a grim atmosphere come together in a space solely devoted to scaring all its visitors in the funnest way possible. You’ll be able to venture into a huge tunnel of terror, say hi to the Adams Family, and even confront serial killers, epidemics, and zombies. All of that mixed in with the excitement and adrenaline of rides and attractions that will draw the most piercing screams out of each of you. 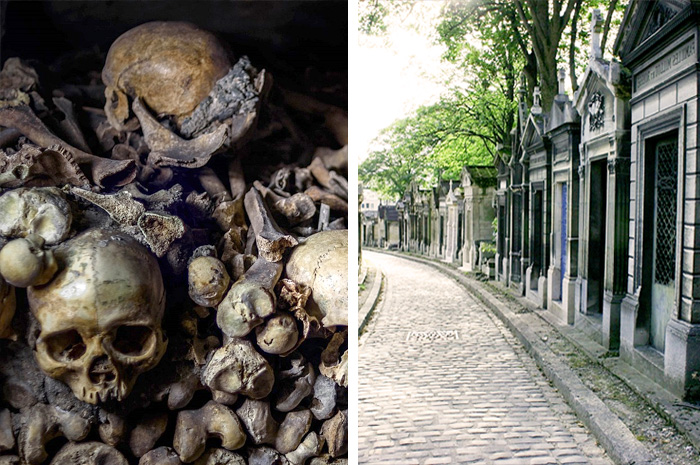 We are used to thinking of Paris as the city of romance, the place to get lost in passion and the reverie of being in love. And yet, Paris hides a darker side; an unsweetened version of the city, where spirits and shadows hold sway over its innocent visitors.

Just approaching the Père Lachaise Cemetery sends a cold breeze through each of our defenseless pores. The remains of celebrities like Honré Balzac, Fréderic Chopin, Delacroix, Molière, Jim Morrison, and Edith Piaf, among others, rest down below. By day, a beautiful park for a pleasant stroll. By night, the perfect setting for all your worst nightmares.

And since this is all about the dead, you can’t miss out on the popular Catacombs of Paris, spanning over 300km and holding the remains of more than 6 million people. One can still hear the distant, agonizing cries of some of them. 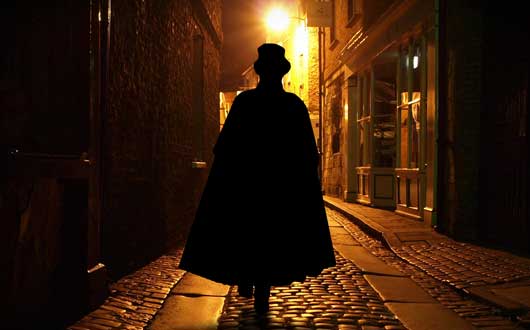 It was no coincidence that killers of the likes of Jack the Ripper and Sweeney Todd chose the English capital as backdrop to their bloodiest crimes. London is a maze of inhospitable alleys reminiscent of the most dreadful episodes in memory.

Moreover, the week of Halloween sees the unfolding of the London Paranormal, a festival focusing on analyzing and sharing any paranormal experiences that have taken place in the city. At the same time, the London Eye turns into a makeshift witch academy where monstrous characters tell horror stories; while a haunted cruise ship sails the waters of the Thames. 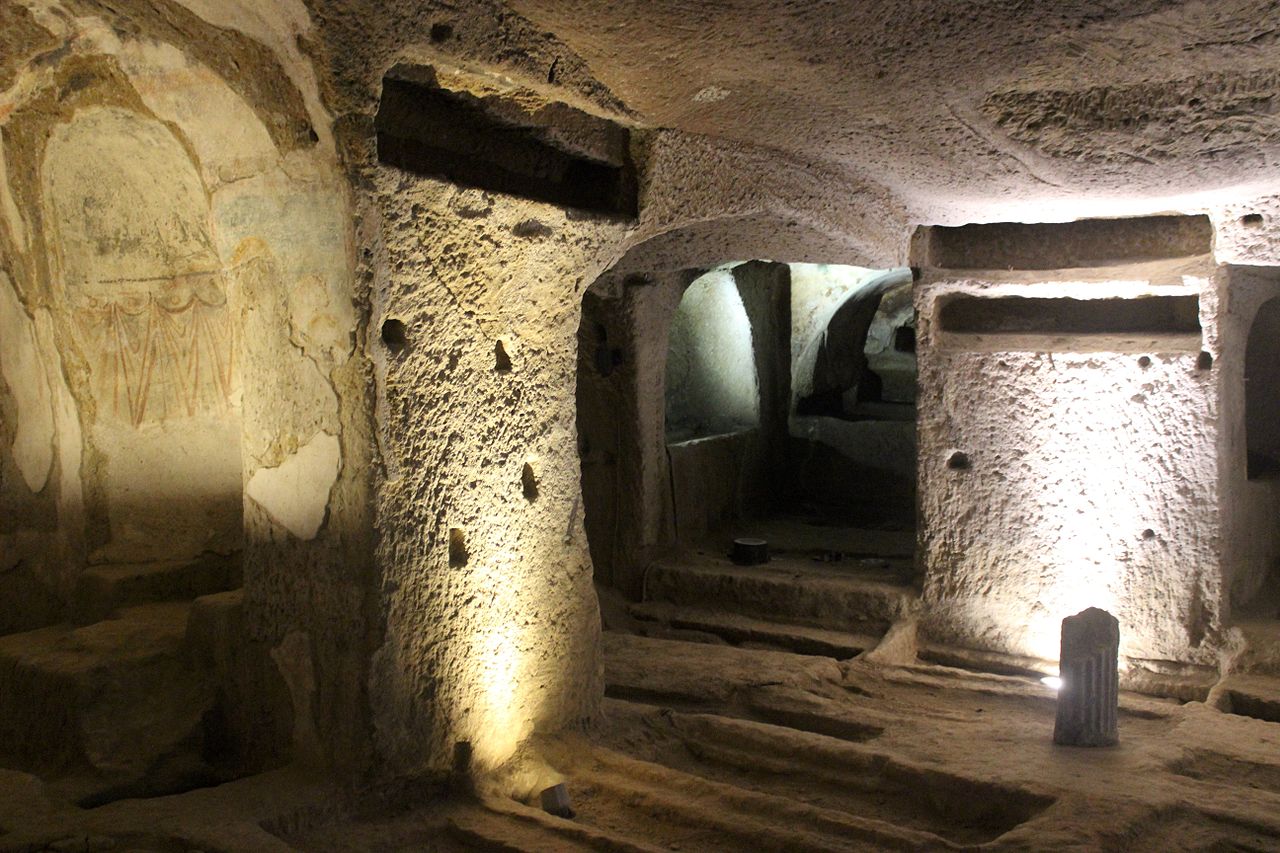 Naples is yet another city with a heavy historical load that goes deep into its subsoil. With catacombs (San Gennaro) spanning almost 5,600 square meters excavated into Capodimonte Hill, this town in Campania joins our list of mysterious and gruesome travel destinations for a perfect Halloween night. 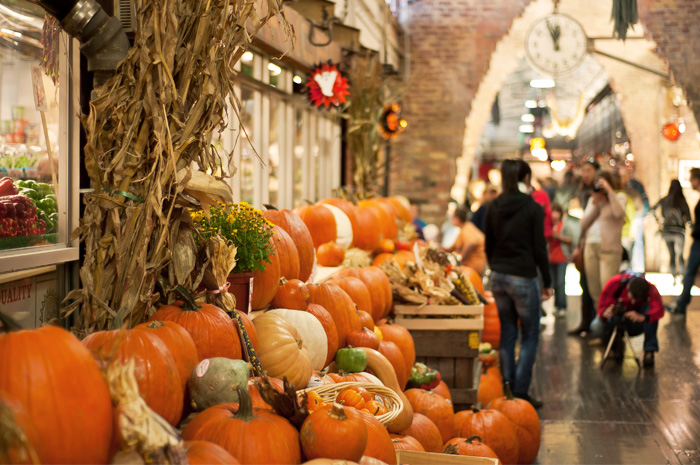 Americans are the true mastermind behind this festivity and nobody quite like them to celebrate it at large: following tradition, getting the best Halloween costumes, and paying careful attention to every last detail. From swarms of young (and not so young) children trick or treating, to the spectacular parade that unfolds every year in Greenwich Village, in the heart of Manhattan, where witches, zombies, and pumpkins put themselves on display before the eyes of over 60,000 people.