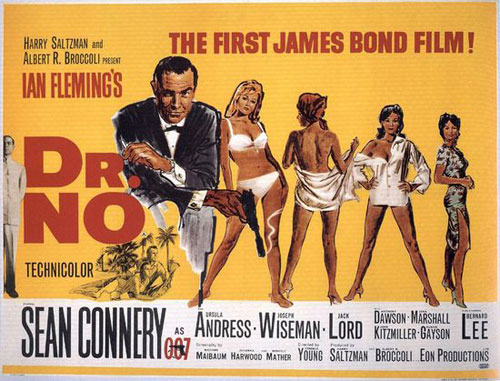 On occasion of the 50th anniversary of the first Bond movie Dr. No in 1962, the Museum of Modern Art in New York City (MoMA) is presenting all Bond Movies throughout the month of October.

Over the years several actors have slipped into the role of the smooth secret agent. Whether he was played by Sean Connery, George Lazenby, Roger Moore, Timothy Dalton, Pierce Brosnan, or Daniel Craig the mysterious, sophisticated demeanor and his quiet confidence make him irresistible and serve him countless romantic yet short lived encounters on a silver plate. He always remained a loner and the only woman he will always be loyal to remains the Queen of England.

But it is not just the personality of this fictional character (created by novelist Ian Fleming in 1953) that turns the movies in such a phenomenon. As already mentioned before the Bond style remains timeless, his desirable women, his gadgets and vehicles never fail to surprise, the music of the movies is just as anticipated as the movies and his signature drink vodka martini, shaken, not stirred is a detail that everyone associates with James Bond.

It has to be a question of personal taste which of the Bond actors and/or movies is your favorite, but what remains without a doubt is that the Bond movies are some of the great classics of our time and this over the course of 50 years already.

From October 5th until the 31st you can see all movies at the MoMA. If you happen to be in New York this month, visit the MoMA website for further information on the movie screenings. Take this opportunity to watch your favorites or see which ones you haven’t seen yet.

Other events at the MoMA include:

– 9 + 1 Ways of Being Political: 50 Years of Political Stances in Architecture and Urban Design

If there is nothing at the MoMA that catches your interest the Big Apple has plenty of other things to offer. Our accommodation offer has plenty to offer as well, there is no doubt that you will find great places to stay in New York.