AC/DC in Barcelona and Madrid: Rock and Metal Pub Crawl

The legendary hard rock band, AC/DC is coming back to Spain. The Australian band will present their new album, Rock or Bust, which has debuted at number 1 on the charts of 10 countries, namely Australia, Austria, Belgium, Canada, Switzerland, Finland, France, Norway, Sweden, and Germany. In the latter, it also became the fastest-selling international album in almost ten years.

The last time AC/DC came to Spain was back in 2009, at which time they played five concerts in the country, three in indoor venues in Bilbao, Madrid and Barcelona, and right before summer, they announced another two gigs in outdoor arenas that took place at the Montjuic Olympic Stadium and at the Vicente Calderon Stadium. 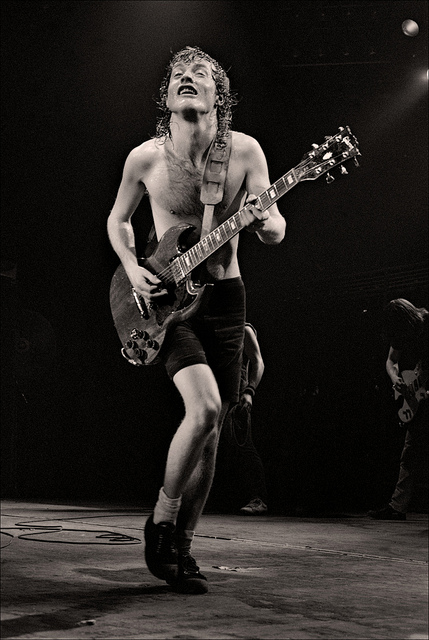 The tour will feature the awaited return of Chris Slade on the drums. Catch them at Barcelona’s Lluís Companys Olympic Stadium this coming May 29th, or at Madrid’s Vicente Calderón Stadium on May 31st and June 2nd.

We’d like to recommend some local rock venues so you can party on with the metal crowd. Rock on!

The Bollocks Rock Bar is a well decorated rock bar. It combines very affordable beer with a selection of music that takes one back to the Guns’n’Roses years. You’ll find a mannequin of Iron Maiden’s Eddie sat at the toilet hanging on the wall. It is never quiet at The Bollocks, and you are better off making a reservation if you want to find a table.

Barcelona’s Valhalla Club de Rock is a rock club in the Ciutat Vella, the part of town with the highest density of music stores per square meter. It is frequented by metal heads, rockers, and goths. The venue is dark and sinister, and it plays the best of New Wave, Industrial, and Goth music- right in line with the club’s atmosphere. They have blues jam sessions once a week, and gothic sessions on Sundays.

Kurgan Club is a small and dark bar that plays good rock, heavy metal, hardcore and metalcore. It’s the perfect place to have a long drink or a beer. The venue itself is well decorated and there are large screens on the walls showing video clips to the songs that are playing. It is a low-priced place that fills up quickly.

Rainbow is a rather unique pub because despite its name and its location, many rock and metal lovers find in it one of the few watering holes of its type in the neighborhood of Huertas. The venue is small and the wall behind the bar is lined with clocks, the faces of which are the logos or most prominent album covers of the big names in metal. An emblematic rock pub!