On December 8th, the Holy Door of Saint Peter’s Basilica will open its doors to mark the start of the 2016 Jubilee year; a momentous religious event that millions of people worldwide have been preparing for. This is the year of Mercy, lasting until November 2016. Floods of tourists, the faithful, curious onlookers, and visitors interested in meeting the Pope are expected to travel the Pilgrim’s Way, and relish in the beauty of one of the great wonders of the world: San Pietro. 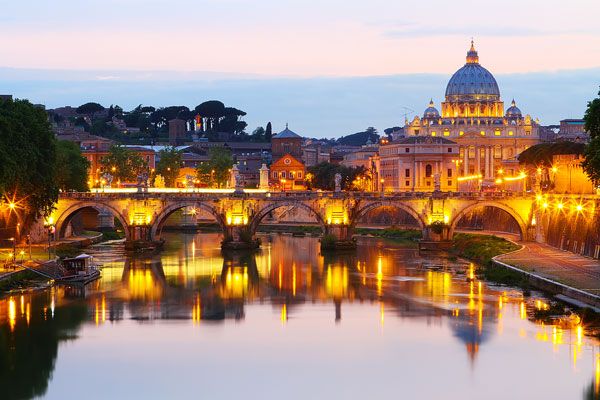 First of all, take into account that visiting the monuments that are part of this itinerary will in itself take some time, at least 2 hours. However, the itinerary is well worth it, as it enables one to get acquainted with some of the most beautiful and mysterious sites in the Eternal City.

Let’s go through the highlights. Shall we start?

1. The Archbasilica of St. John Lateran: the Pilgrim’s way starts here, in the oldest basilica in the world, known as the Mother and Head of all churches; important and large. Anything we could say about its interior would not do it justice: once inside you’ll discover why it is known as the “mother”. Simply magnificent.

2. The Colosseum: undoubtedly, the most recurrent image when we think of Rome. Considered to be one of the Seven Wonders of the World, this building full of history is amazing by day and spectacular at night, with all the lighting surrounding it.

4. Altare della Patria: a wonderful bright white monument that emerges from the heart of Piazza Venezia. At its center, we find an equestrian sculpture of King Vittorio Emanuele II. This monument talks about the birth of Italy as a nation, and thus the Italian flag is displayed from its highest point.

5. Puente Sant’Angelo: here you can let yourself be seduced by the beauty of Castel Sant’Angelo. We’ve practically reached the end of the Pilgrim’s Way.

6. I know what you are thinking… you’ve left out the most important part! We’ve reached the end of our tour because we are finally in front of San Pietro. This impressive Basilica houses within it the history of the Christian religion, no more and no less. We’ve saved the best for last as closing to our itinerary through the city of the 2016 Jubilee.

What You Cannot Miss

Once you reach the Basilica, pay attention to the optical illusion that Master Bernini purposely designed. He thought it through well! When you first enter, you’ll notice that the square is flanked by a huge colonnade formed by 4 rows of columns describing an ellipse. Now, walk towards the marble disk on the ground, by the obelisk, where you’ll find the inscription Centro del Colonnato. Stand on the disc and watch the columns… the 4 rows have disappeared and it now looks like there is only a single row! A true architectural wonder only at the reach of masters like Bernini.

Once in Saint Peter’s Basilica, let yourselves be enthralled by its magnificence, history, and art: Bernini’s Baldacchino, and Michelangelo’s Pietà, among others.

And to end with, you obviously can’t leave without letting the magic of the Basilica’s huge dome overwhelm you. It is the highest in the world, and it was built in the 16th century by Michelangelo Buonarroti, and of course, the Sistine Chapel, Michelangelo’s masterpiece that doesn’t leave anybody cold.