On September 14 and 15, Dcode Festival returns to the campus of the Complutense University (Madrid) to delight music lovers with its second edition.

The festival promises to be one of the year’s best musical events, thanks to the excellent line-up that has brought together, among others, The Killers, Sigur Rós, The Kooks and Kings of Convenience. 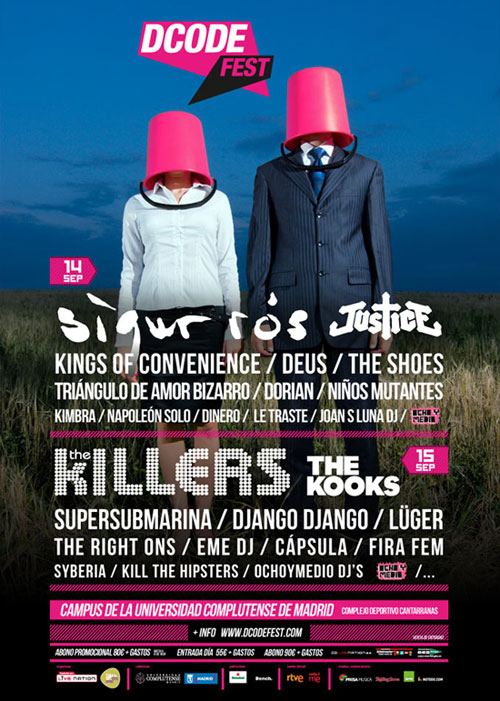 Tickets for DCODE Festival can be purchased for individual days (€55 + fees) or for the entire festival (€90 + fees).

The fact that starting September 1 new regulations require VAT to increase from 8% to 21% will certainly affect the festival, not only in terms of artists’ fees, but also concerning a possible rise in ticket prices.

Dcode tickets can be purchased at El Corte Inglés as well as through Ticketmaster and LiveNation.

And the stages atComplutenseUniversityinMadridwill once again be the setting, where some 25,000 spectators enjoyed concerts by artists such as Eels, Sum 41, Lori Meyers, Havalina or Kasabian as part of the 2011 edition.

The facilities, in particular, will be C Art C and the sports complex called Cantarranas, both located within the University Complutense of Madrid. And there are many public transportation options available to attend Dcode:

– Take the bus to Dcode:

No doubt the above-mentioned groups, including some of the most celebrated international bands, will delight anyone attending the festival. You’ll be able to enjoy music anthems like “Human” and “Somebody Told Me” by The Killers or “She Moves In Her Own Way” by the British quartet The Kooks live in concert.

There are also several Spanish music groups that are known for their performances, including Supersubmarina, Dorian, Niños Mutantes and Triángulo de Amor Bizarro.

Supersubmarina, having recently released their second album, SantaCruz, is having a great impact and success at other festivals such as the Low Cost Festival in Benidorm or the Monkey Days of Gijón.

What to see in Madrid

During your visit to Madrid, we would also like to suggest some alternative entertainment options, so that you can fully enjoy your stay in the capital around the Dcode Fest area 🙂

– Food & Dining: Krüger and Clover House are two affordable spots that are great for lunch and or to enjoy a few beers.

– Visit: The Moncloa Lighthouse and the Temple of Debod are two must-sees in the area. We won’t give you too much information, so that you can judge for yourself. But go to the first for great views and the second, for its unique and beautiful environment.

– Going out: Given the wide variety, we won’t dare recommend any gambling dens in the area but leave the choice up to you. If you still have any energy left after the festival, that is.

Find out more about the DCODE Fest on their official website: http://www.dcodefest.com

So what are you waiting for? Come escape to Madrid for a few days, enjoy the festival of the year and take advantage of our variety of accommodation in Madrid.