No plans for New Year yet? All dressed up with nowhere to go? If you find yourselves in New York City or London, you are very lucky! We have searched the best places to spend your NYE so that you, our wonderful readers, can start a 2016 in style! 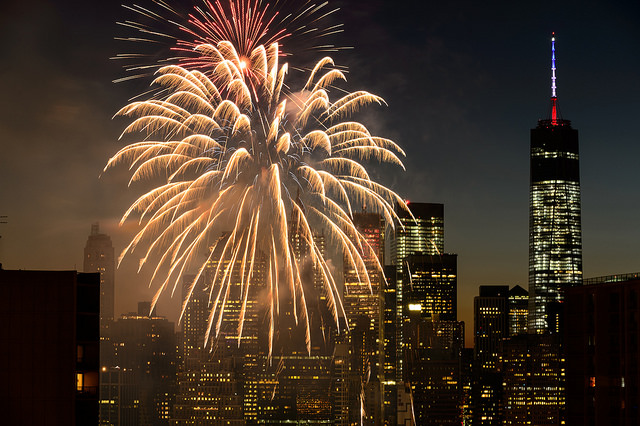 Where to watch the best fireworks in New York

A nice hot beverage while enjoying the fireworks sparkling over Park Slope and listening to live music is never a bad idea, and it’s free!

For a free, relaxing New Year’s Eve celebration for all ages, ring in the New Year watching fireworks explode in the night sky in Central Park. The fireworks are launched at midnight from Central Park’s Naumburg Bandshell and can be seen from virtually any spot in Central Park.

New Year’s Eve at the symbolic center of NYC has become more than just a celebration – it’s a global tradition. Also, it is the most visited tourist attraction in the United States. The Times Square New Year’s Eve celebration features star-studded musical performances, balloons, handouts, confetti, a colorful pyrotechnic display and the famous ball drop. We recommend you get there early, 3pm early.

Book the Annual Brooklyn Bridge Walk, which gives participants a Lower Manhattan history lesson before heading to the Brooklyn Bridge to catch a glimpse of fireworks displays throughout the city. Depending on the weather, you might see the colorful sparks over Staten Island, Central Park, Brooklyn, and New Jersey

For an out-of-this-world party, go to BangOn!NYC for their annual Time and Space bash. It takes over a 32,000-square-foot Brooklyn warehouse, with two stages for music from Justin Martin and Kill Frenzy and performances that utilize zip lines, 3-D projection mapping and “cyber time travel”, which you will eventually find out what that is if you attend!

A Toshi party extravaganza which has to be seen to be believed. Six hours of open bar on the main floor, mezzanine and penthouse levels. Expect live music and DJs throughout the night

Phish returns to Madison Square Garden in New York for a four-night New Year’s Run to ring in 2016, so throw on your best ratty tie-dye, and jam for four long, strange nights of four-hour shows, confetti, costumes, glow-stick wars and other ridiculousness.

Something a little different for NYE…

At the Slipper Room’s annual Lovefest you’ll experience a scintillating night with a bit of everything: Pinkie Special masters the hula hoops, Harvest Moon dazzles with burlesque, Matthew Holtzclaw makes your inhibition disappear with his magic tricks, and aerialist and acrobat Jason Mejias contorts in midair. Prices range from 35$- 1000$.

Burn off those last calories of 2015 as you take your wheels, bike or skates on a jaunt up the West Side for the annual Time’s Up New Year’s Eve Ride. Gather at the arch in Washington Square Park at 10:30 pm to travel to your destination: an outdoor dance party near Central Park’s Belvedere Castle, beneath fireworks at midnight.

Where to watch the best fireworks in London

This spectacular event takes place on the River Thames, opposite the Houses of Parliament and since last year it has a ticket cost of £10, due to the crowds at the riverbank.

Parliament Hill offers some gorgeous views, even if the spectacle is a bit way off. Still, it’s a beautiful spot and there’ll be plenty of people with their own fireworks, too, so you’ll be spoiled for choice. Another option is to wonder further into Hampstead Heath, which holds its own as a haven away from the city.

The iconic Tower Bridge has a stunning view of all the fireworks, with a nice and cheery atmosphere, but it gets increasingly busy year on year. Southwark Bridge and Millennium Bridge are closer and offer better views, but expect them to be rib-crushingly packed.

Boogie in silver this New Year’s Eve as The Mansion puts on one of the most stunning parties in London. From clairvoyants and electro swing DJs, to street food, fire shows and live psychedelic movies, The Silver Mansion is set to impress with an out of this world party.

All board! For a night full of champagne, fantastic music and even better views of the city, look no further: the Big Bang Boat Party returns to answers all of your needs. The 5 hour cruise will take you to a 2016 in style, embarking at 8pm in Westminster Pier.

Ring in the New Year 100ft above London at The Roof Gardens partying like its 1922! Flappers and gangsters will be treated to a night of opulent 1920’s glamour and glitzy entertainment with live brass music, complimentary cocktails and seasonal winter BBQ, complete with spectacular firework display at the stroke of midnight to see the New Year in with a bang.

Something a little different for NYE…

Ring in 2016 at the Brazilian inspired celebration by the tradition of Réveillon. Every New Year’s Eve, Rio de Janeiro revellers dress in white and set candlelit offerings afloat on nearby waters to honor Yemenja, the Goddess of the Sea. ​​Featuring live entertainment from The Rockets, DJs spinning all night and Samba dancers, Sushi samba will take you to new heights.

Shimmering on the banks of the Thames, go back in time to what New Year’s celebrations were all about with a Venetian Masquerade black-tie ball at the OXO Tower. Decadent, opulent and above all, mysterious, think beautiful dresses and high drama to get you into the spirit.