The 30th of April is Queensday in Amsterdam, the birthday of the Queen Mother. Despite that it´s special in Amsterdam, this festival is celebrated throughout the Netherlands with open-air parties and covering everything in orange. 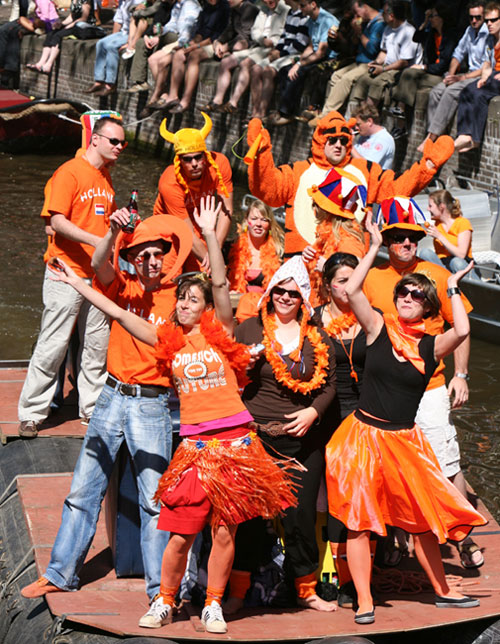 The first celebration of Queensday was on the 31st of August 1885, with the birth of Queen Wilhelmina. In 1949, sixty-four years later, they began to celebrate the birthday of Queen Juliana, April 30th, as a tribute of her coronation.  Today, Queen Beatrix still celebrates this party, keeping the tradition in her mother´s honour.

The party begins around 7pm and the city goes onto the streets, with everyone walking around Niuewmarkt and the Jordaan, open spaces that start the party on the street. There are plenty of parties, street salesmen, activities for children, DJs for young people and adults and classical music concerts. To summarise, there are activities for all ages.

One of the most curious activities of this day is that you can buy all sorts of second hand objects because everyone has the right to go on the street and sell whatever they want, transforming the city into one big flea market. For that, many people set up stalls in the parks, on the sidewalks and even on the roads, and sell sweets, books and various interesting objects, because nobody pays tax on this day.

The canals are full of boats of all shapes and sizes, where people celebrate Queensday (Koninginnedag in Dutch) with music, dancing and drinks.

However, if there´s something that makes it special is the distinctive use of the colour orange. You can see people in orange wigs, t-shirts or different clothes in that colour that give the party a special touch. The colour orange represents the name of the royal family, The House of Orange, so the whole city dresses up in that colour.

The party attracts close to 700,000 visitors who enjoy this unique party, because, for a day, Amsterdam fills with dance and music that breaks all existing rules and where all excesses are permitted, as long as they´re not crimes.

Despite that during this time of year the weather isn´t very warm, these type of parties warm up the atmosphere and make it ideal to practice different dances in the open air while you have fun meeting people who want to do just that. Queensday is, for the Dutch, a cultural activity that connects them with their history and tradition.

You can´t get around Amsterdam in a car that day so the trains and public transport have special timetables, so check it out so you don´t get stranded.