The quirkiest Christmas traditions around the world

Christmas is here again and thinking about those folks who love the happiest time of the year, we have compiled the top three weirdest Christmas traditions in the world, so when you finish reading this article, choose one of the traditions you liked the most and just head there to celebrate Christmas. Let’s celebrate an unforgettable Christmas this year! You´ll have so much fun, guaranteed!

The region of Catalonia in Spain is famous for its unorthodox celebrations. As an important part of the Christmas traditions, there are two characters that catch most of the attention of the unsuspecting tourists in the region: the Caganer and Caga Tío.

The Caganer is a figurine of a celebrity in a squatting position that illustrates the act of excretion. This comic character, a key part of the Catalan nativity scenes, has a profound meaning of fertility for farmers in the region. The Caganer became popular with the passing of the years and today it is symbol of luck for all Catalans. 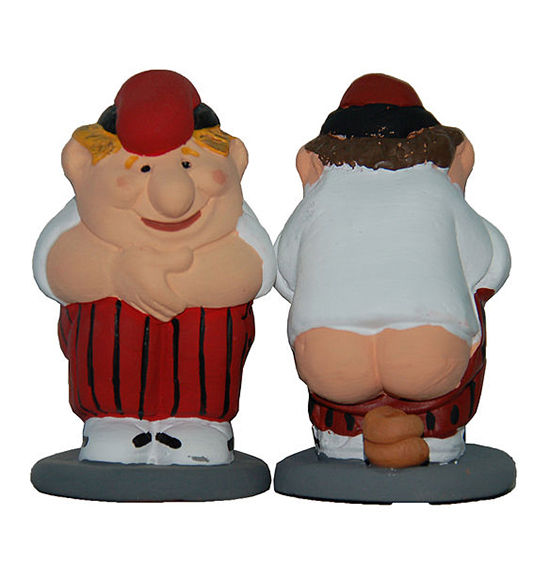 The Caga Tío is a wooden log dressed with a hat and a red cape (part of the Catalan traditional costumes) that basically poops gifts to Catalan children, who must sing songs and hit him with a stick to get their Christmas presents.

All good children receive many gifts at Christmas, but what about children who haven’t behaved well during the year? In Alpine countries, especially in Austria, Santa has an evil companion named Krampus, who is responsible for putting in a sack all misbehaved children he finds on his way, to devour them at the end of the day. During the first week of December, men dressed as Krampus go out with rusty chains and sticks to scare children and encourage them to behave well throughout the year. What a great way to teach manners to children, isn’t it?

In countries of the former Yugoslav republic, Mother´s Day is not celebrated in May, but some days before Christmas. In these countries, Virgin Mary’s motherhood is specially celebrated during this time of the year. However, the way in which children pay tribute to their mothers is highly unorthodox and almost taken out of a horror movie. Two weeks before Christmas, children quietly capture their mother and tied her feet to a chair while singing “Mother´s Day, Mother´s Day, what will you pay to get away?” Mothers are usually prepared to pay with gifts their release. A beautiful way to express love to our mother, isn’t it?