The meaning of Christmas in Japan is rather profane; it is an adaptation of the most striking and commercial traditions from west. If you are visiting Tokyo during Christmas, you’ll find the city decorated with even more lights than usual, the streets will be adorned with Christmas trees and all kinds of adornments. You’ll also find a Christmas tree in most of the houses from the 14th of December, which is the day the trees are displayed for Japanese Santa: Hoteiosho to come. Although not exactly like his Western namesake, Hoteiosho also loves children. Japanese Santa is always alert with his magical eyes to reward children with gifts. 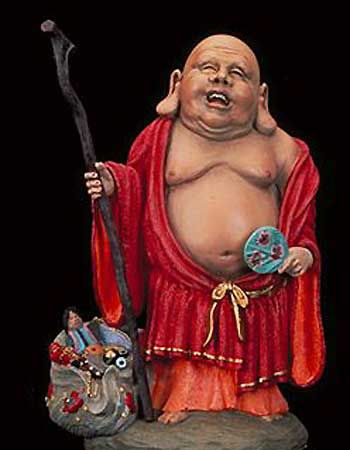 Before New Year’s Eve, Japanese people perform a thorough housecleaning called, Susuharai, which means that they want to start the year, clean , with good luck and prosperity.

However, although they have adapted some of the western traditions, on the 25th of December, they don’t have any kind of celebration, indeed, the 25th is not even a holiday. For some youngsters, Christmas Eve is usually just a day to go out for dinner with their couple. On the other side, New Year´s Eve, better known as O-misoka, is a big celebration in which Tokyo gets beautifully adorned, as these are the two most important days in their calendar. Tokyoites gather to celebrate New Year´s Eve with their families. They normally have a traditional dinner that includes the “toshi-koshi” noodles that represent the desire a long life. After dinner, they drink their first sake of the year, which is called “O-Toso”, they normally don’t drink champagne during this celebration. After dinner, as in Spain, they have a kind of bells chimes, but not exactly like us, they have a hundred and eight shots echoing across the city from the temples, which mean the number of human failings according to the Buddhism. On the 2nd of January, the inner gardens of the Palace open for the public for them to be greeted by the imperial family.

Tokyo, like any other capital, is home of a large number of foreigners that enjoy the street’s magnificent lights show during Christmas. Enjoy the 15-meter Christmas tree in Tamacenter and for shopping lovers, there is no better place than Ginza: there you’ll find all kinds of gifts for your loved ones.

The Japanese capital is a good place to spend a very unique Christmas. Getting accommodation in Tokyo apartments is very easy if you book them in advance. Spend and unforgettable Christmas in a unique place as Tokyo, you won’t regret it.