Traffic Lights around the World for all Tastes

What would our life be without traffic lights? Waiting for the light to turn green from the other side of the street is not a waste of time. Not at all, in fact, it’s life-saving. These devices have changed quite a bit since 1914, when the first traffic light in history went up in Cleveland (USA). They have them for all tastes: frugal ones, funny ones, and gender-friendly ones. We’ll be traveling around the world through traffic lights.

You can’t put a price tag or limits on creativity.  The Icelandic town of Akureyri had the brilliant idea of subbing round lights for green and red heart-shaped ones. As a result, through this curious idea, the Akureyri authorities have managed to get pedestrians to pay more attention to pedestrian traffic lights, reducing the number of accidents.

The minute we set foot in Berlin, one of the first things to strike us are the traffic lights. For those not in the know, these funny looking figures are known as Ampelmännchen, and when the red figure opens its arms, it means no crossing. If, on the other hand, the green figure lights up and takes a step forward, you are allowed to move on. The Ampelmännchen have become so popular that they are a mark of identity of the city itself, as well as the star image in souvenir shops.

Traffic lights for men and traffic lights for women. On the occasion of International Women’s Day, the city council decided to dress traffic lights in downtown Valencia in skirts, so that women would also be represented, without falling into positive discrimination. This measure has not been exempt from myriad positive and negative comments on social media.

Embedding traffic lights into the ground is a pioneer initiative taken in Cologne and Augsburg, as well as an example for other cities that could soon follow suit. These lights have been thought out for those pedestrians that walk with a mobile phone in hand, never looking up from the screen, not even to cross the road or, in this case, the tram rails. The mechanism is very simple: LED strips on the ground light up to warn of danger when the traffic light goes red.

Traffic Light Tree is an art work by Pierre Vivant, and such was its success that, it was transferred to the Billingsgate Fish Market roundabout in 2014. Fortunately, it serves no traffic regulation purposes; it’s purely decorative. Nobody would be able to figure out the lights on this sign, and it would hinder drivers more than it would help them. Just so you get the idea, it’s over 8 meters tall with 75 sets of lights,  and its complexity earned its designer the  Public Art Commissions Agency Award. 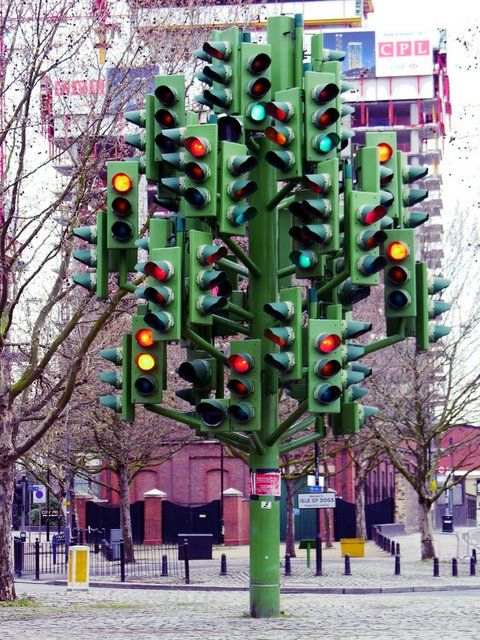 Yellow, Blue and Red in Japan

Don’t get fixated on finding green traffic lights in Japan because they’re not easy to find.  It’s just a tip. If you are traveling to the country of the Rising Sun, know that green lights have been substituted for turquoise lights. And there’s a reason for it: Japan and other Asian countries use the same word for both blue and green. So don’t freak out, you are not color blind.