Touring the best stadiums in the world

The World Cup in Brazil will start in June 2014 and the Spanish national team will do its best to defend its title as champion. Football is always a good excuse to travel and touring the best stadiums in the planet is just a great plan. If you visit countries like South Africa or Brazil, it would be a sin not to visit the Maracanã in Rio de Janeiro, or the Soccer City in Johannesburg. It is a highly recommended experience even if you aren’t a football freak.

The mythical Wembley is one of the most beautiful football stadiums in the world; it looks like a planet due to its shape and the ring around it. No doubt its image catches the attention of visitors. Since the new Wembley opened its doors in 2007, it has been shining every day as if it was a luminous work of art: it can host around 90,000 fans. Its construction was part of the London 2012 Olympic project and, of course, it deserved to go into the history of sports as the chosen venue for the opening and closing ceremonies of the games. 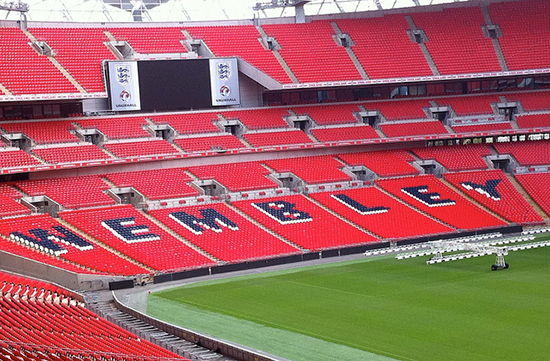 Soccer City brings spectacular memories to Spaniards, because it was the place where they won the World Cup 2010. Located in Soweto, this stadium became very famous because it hosted Nelson Mandela’s speech when he was released from prison in 1990, as well as his funeral in December 2013. With capacity to host more than 90,000 people, it is the largest stadium in the entire African continent.

The real name of this beautiful stadium is actually Estádio Jornalista Mario Filho, which became very famous after hosting 200,000 people during the final of the World Cup Brazil 1950. That year Brazil lost the final against Uruguay in the well-known “Maracanaço”. There, Pelé scored his 1,000th goal and became the biggest icon in the Brazilian football. Have you ever wonder where the name comes from? Maracanã is a very common bird that used to inhabit the area where the stadium was constructed in 1950. Located north of Rio de Janeiro, this wonderful stadium will be the main host during the World Cup 2014. Estádio do Maracanã has also host famous bands like The Rolling Stones, Paul McCartney and the great Frank Sinatra.

Already starting the engine for this year’s World Cup? Looking for apartments in Rio de Janeiro? You are in the right place.