Whatever you´re looking for, the cosmopolitan, open and enormous city of New York will offer you plenty to do. In this post we are not going to bore you with talk about what you can see in New York, since you already know that. Instead, let´s talk about one of the tourist attractions of the city: the food you can eat in the Big Apple without entering any restaurant — street food. 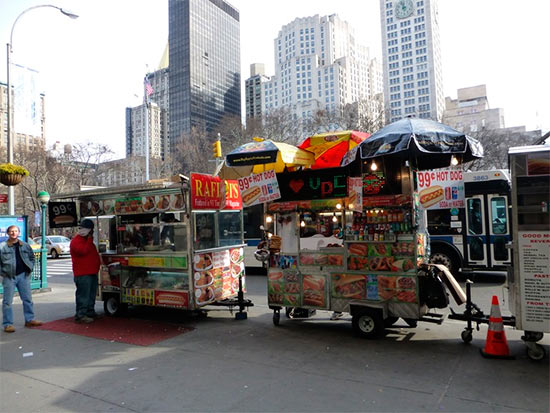 This is the happy union of two pastries prized worldwide: the donut and the croissant. That’s right, and it’s a dream come true for many. The original cronut was created by Dominique Ansel in his New York bakery of the same name. It is located on 189 Spring Street in lower Manhattan. The invention is relatively recent, but since becoming really popular in May 2013, it has spread worldwide. It costs $5 and is a must if you’re going to New York. But be forewarned: you very well might have to take a place in line!

The hot dog is a quintessential New York snack that you’ll end up eating even if you want to avoid it because it’s so ubiquitous. You’ll be given the sausage in a bun and you can then add any condiments you’d like. They’re sold from carts all over the city, which makes them a very convenient food on the go. And they’re cheap!

This twisted dough snack is of German origin but can easily be found all over the city. And typical of the New York, you can get them in just about flavor (with sugar, seeds or nuts, for example) but they normally come seasoned with salt.

Sandwiches, crepes, pizza and food from around the world

So far we have seen three of the most popular street foods, but the reality is that New York is like a restaurant of the world. Walking through its streets you will find food from all corners of the planet in food trucks or stands in the middle of the sidewalk: Italian pizzas, sandwiches of all kinds, sweet and savory crepes, Vietnamese, Chinese, Japanese, German, French… whatever you want! And all without entering any restaurant, right on the street.

Manhattan is also filled with food trucks where people line up around meal times. New Yorkers can be seen everywhere eating something or another in the street coming to or from work or classes. The lines form early at some of the trucks which are pretty much permanently installed at strategic points in the city. There’s definitely something for everyone. Here you can find out about some of them:

Hungry? Well, don´t wait! Book your apartment in New York today from 66€ and get out onto the streets of the Big Apple.