The Metro, “The Underground” or “The Tube” in the British capital lacks nothing that any of its neighboring countries has. With more than 350 stations, it is worth a tour in and of itself. One could almost say that it isn’t necessary to go outside to get to know the map of London. It is the world´s oldest metro, and its first line (the Metropolitan Line) was constructed in 1863. 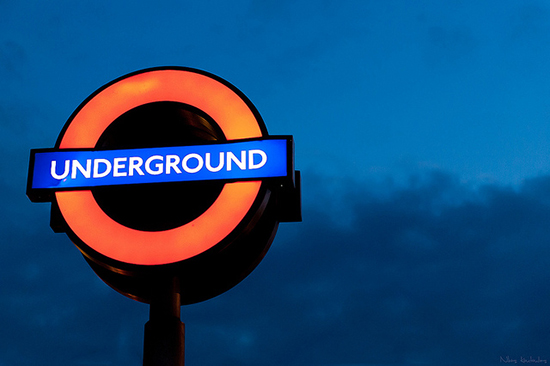 The lines of the “London Underground”

Here are some interesting facts: The Central Line, starting in West Ruislip and ending in Epping, is the longest in existence. In fact, the London Underground is the third most extensive subway system that has ever been built, after Beijing and Shanghai. The most popular route, which is also full of tourists, is the one from Leicester Square to Covent Garden on the famous Picadilly Line, but that journey is actually so short that you could easily walk. To give you an idea, it takes about 20 seconds to travel (so about 250 meters).

Why not stop at each of the stations?

All of the Metro stops have escalators, but one really stands out above the rest. I’m talking about Angel, the Northern Line, which boasts a height of almost 60 meters and more than 160 steps. And if you’re a data geek, you’ll be interested to know that the moving escalators cover a distance equal to around the world twice a week. There are 426 across the entire network. Yes, they go up and up. And when you leave a train car, you’ll hear a sentence that will remind you that there is a hole between the car and the platform: “Mind the gap.”
One of the strangest facts is that the Jubilee Line has a legend associated with it that says it was named because of the many retirees and older people traveling on it. The truth, however, is that its name is related to the monarchy. You won’t want to miss seeing the art on the London Underground, the Tottenham Court Road station, for example, has mosaics by Eduardo Paolizzi. They are definitely worth seeing, and their colors will transport you to another place. It’s also a good way to entertain yourself while waiting on the train.

If you have recently gone to London or you´re thinking about it, you should be aware that to commemorate the 150th anniversary of the English Football Association the metro stops have all been temporarily renamed with the names of internationally known football players and coaches. For example, Pelé, Cruyff, Cristiano Ronaldo, Gareth Bale, etc. And there’s also room for Spanish footballers, the current world champions, including Cesc Fábregas, Xabi Alonso, Mata, Arteta, Silva, Pepe Reina, Rafa Benítez, and Torres.

Did you know that there is a type of mosquito, the Culex Molestus, which is known as the “mosquito of the London Underground”? This has to do with the fact that the bug was first discovered in the underground during World War II when the platform became a refuge for many people.

Use our website to rent apartments for days in London city . It´s the best way to experience the British capital.